The River Club is the only Townhouse community within Grand Haven. With only 72 units, they are in great demand.

Built by ICI Homes in 2004, this end unit townhouse has two bedrooms, two baths, a two-car garage and 1,828 square feet of living area. It has been meticulously maintained and shows like a model. As an end unit, 16 River Park S offers more lighting provided through the extra windows, further enhancing the open split floor plan. There is a den and a wall of glass leading to a private 480 square foot screened lanai. 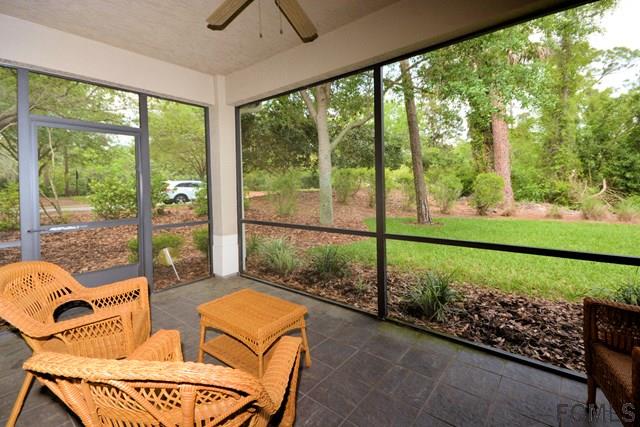 The tile in the kitchen, dining and great room are laid on the diagonal. The exterior is virtually maintenance free; landscape, shrubs, exterior paint and roof. It’s perfect for someone looking to downsize in an amenity-rich community. Since Shirley and I downsized six years ago, I’ve talked to many others who have too. Not one of them tells me that they wish they had waited longer to make the change.

Grand Haven is rich with amenities. The Village Center is only steps away from our featured home, offering a café, bar, fitness center, bocce courts, seven Har-Tru tennis courts, croquet, and a heated pool &spa. Its Grand Haven room is available for meetings and social gatherings. Miles of sidewalks and an Intracoastal trail wind through the community. There is a second village center with a pool at the north entrance to Grand Haven. Membership to the Grand Haven Golf Club, with its Jack Nicklaus Signature Golf Course, is optional.

Grand Haven is located in Palm Coast, one of America's newest cities, just over the Intracoastal Waterway from scenic Route A1A and miles of beaches. Drive A1A.to Marineland Dolphin Adventure only eight miles north. Travel another 17 miles to St. Augustine, North America’s oldest continuously occupied city. Also nearby is ionic Flagler Beach and its great restaurants and shops. Flagler Beach was recently named by Southern Living Magazine as one of the South’s best “Laid-back Beach Towns.” Four of Flagler Beach’s restaurants were recently listed among the best in state and regional rankings.

The Palm Coast area, sometimes referred to as “the quiet side of Florida," features miles of beaches with abundant public access, miles of hiking trails, championship golf courses and top-rated schools. Shop and dine in nearby Palm Coast, recently recognized as one of “America’s 50 Best Cities to Live.” Palm Coast’s population recently topped 82,000. Flagler County’s population recently surpassed the 108,000 mark.

Nearby Interstate 95 provides convenient access to Jacksonville and Orlando. Flagler County’s active general aviation airport is only 15 minutes away.

16 River Park S in the River Club of Grand Haven is offered for $318,000 by Rob Logan, of Berkshire Hathaway HS Fortune Group Properties.