Blog - Latest News
You are here: Home1 / News2 / Cost of Constructing a Home

PALM COAST — November 8, 2015 — The following Cost of Constructing a Home report is made available to the public as a courtesy of HousingEconomics.com. The study is national in scope and highlights the substantial new home land/construction cost advantages Flagler County enjoys.

Special Studies November 2, 2015
By Heather Taylor
NAHB Economics and Housing Policy Group
Report available to the public as a courtesy of HousingEconomics.

Over the years, NAHB has periodically conducted “construction cost surveys” to collect information from builders on the various components that go into the price of a typical single-family home. NAHB’s most recent construction cost survey (conducted in August of 2015) shows that, on average, 61.8 percent of the sales price goes to construction costs and 18.2 percent to the finished lot costs. On average builder profit (including owners’ salary and return on capital) accounts for 9.0 percent of the sales prices. The following sections describe the methodology of the survey and discuss the results in more detail.

NAHB’s 2015 construction cost survey was conducted by emailing a questionnaire to a representative sample of 4,090 home builders. The sample was stratified by size of the builder (based on number of starts) and region of the country (the sample being proportional to housing starts in each of the four principal Census regions).

Over the years NAHB has modified the survey and its methodology. In 2009, the survey methodology changed to provide a better, more representative sample of single-family construction across the country. In 2013, NAHB developed a different construction cost breakdown that more closely resembles the steps which builders take when building a home. Prior to 2013, the breakdown had 29 sections. In 2013, we created eight subcategories for each of the major stages of construction, with a total of 36 sections grouped under the appropriate construction stage. The new format simplified data collection, greatly reducing the number of follow-up calls needed to clarify and verify builder responses.

Respondents were asked to provide information about the average home built by their firms during 2015. Usable responses were received from 33 builders. Table 1 shows the detailed results of the 2015 construction cost survey. 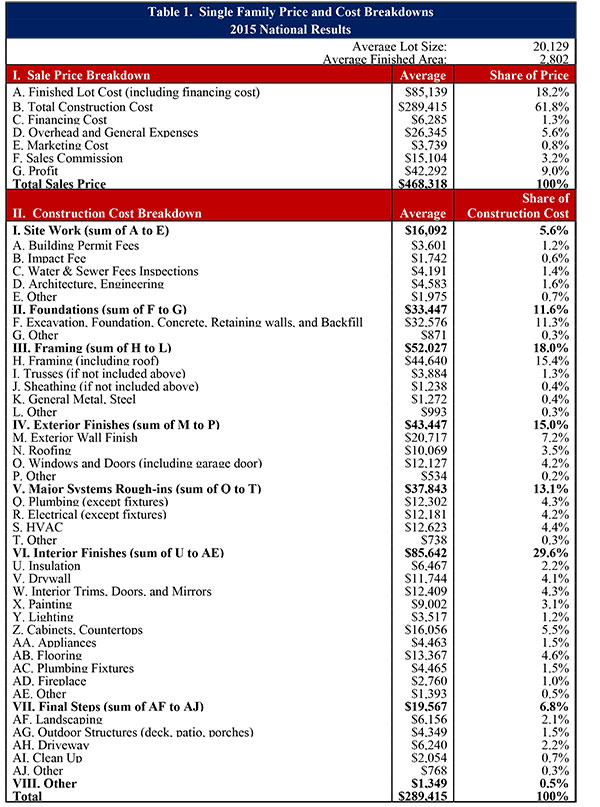 hese results are national averages; the survey sample is not large enough for a geographic breakdown. Building practices, the cost of labor, the cost of land, and to some extent the cost of the materials can vary from place to place and depend on the nature of the particular home being built. Although the survey can provide a broad idea of construction costs for an average home, it is not a perfect tool for estimating costs for a particular house. Companies that provide more specific cost estimating, usually for a fee, include RS Means and Marshall & Swift. The costs include all the costs paid by a builder that go into a particular item, including labor costs paid directly by the general contractor, the cost of hiring subcontractors, and the cost of materials however they are purchased. 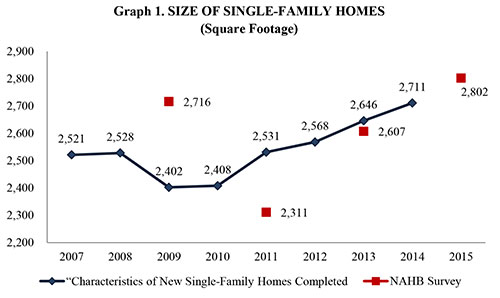 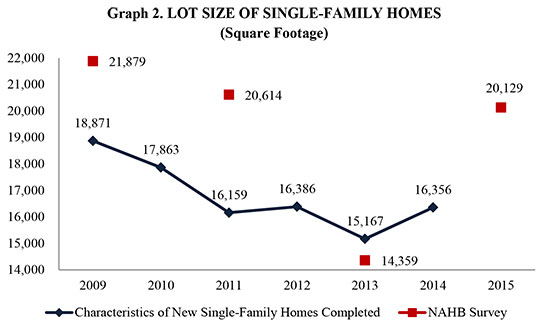 Builder profits were 9.0 percent in 2015, compared to 9.3 percent in 2013. Although the average sales price has been rising, this reflects rising costs rather than an increased rate of profit. During the downturn many builders had to reduce operations and layoff office staff, which resulted in low overhead and general expenses. In 2015, overhead and general expenses, which was at an all-time low of 4.3 percent in 2013, rebounded to a more historically typical 5.6 percent.

The remainder of the sales price is divided between overhead sales commission (3.2 percent), financing cost (1.3 percent) and marketing cost (0.8 percent). Each of these shares is similar to the breakdown in 2013.

In addition to the Construction Cost survey, NAHB’s Business Management Department sponsors the Builders’ Cost of Doing Business (CODB) survey in even numbered years. The CODB is based on the income statements for a firm, rather than the price of an average house. Although the surveys are not perfectly comparable, the sales price breakdown in the Cost of Construction Survey is generally consistent with the results of the CODB. Table 3 contains the comparable parts of the Cost of Construction Survey and the Cost of Doing Business Survey. One noticeable difference is between the Cost of Construction’s profit (9.0 percent) and the sum of the CODB owner’s compensation and net income before taxes (6.4 percent). The share of profit in the sales price of a home indicates that the home was sold, whereas the net income share in the CODB takes into account homes that have both been sold and those that haven’t. Also, the profit in the construction cost survey refers to an average single- family home built by the firm; whereas the profit in the CODB survey refers to all the homes built by the firm, both sold and unsold.

Over the past several years, the share of construction costs going to “excavation, foundation, concrete, retaining walls, and backfill” has been rising. In 2007 and 2009, the share was 7.0 percent and 7.1 percent, respectively, while in 2011 and 2013 it was 9.3 percent, and in 2015 the share jumped to 11.3 percent. Many NAHB builders have reported price increases in concrete products recently. According to special questions on the July 2015 HMI survey, 84 percent of builders reported an increase in the price of cement over the past 12 months, 86 percent an increase in the price of ready-mix concrete, and a 69 percent increase in the price of concrete brick and block. According to the PPI inputs to construction series, between July 2011 and July 2015, the cost of cement increased by 18 percent, and the cost of concrete products increased by 13 percent, while the cost of inputs into new residential construction materials overall only rose about 3 percent.

In addition to material costs, NAHB builders are also having trouble finding excavators. According to the HMI special questions, the share of builders reporting a shortage of excavators rose from 14 percent in June of 2012 to 37 percent in June 2015 for direct labor, and from 17 percent to 46 percent for subcontractors.

There were major changes to the construction cost breakdown in 2013. Some of the categories either remained the same or were similar to past years. In Table 4 the previous year’s category title is captured in parentheses next to 2013’s title. If there is nothing in parentheses, the titles are identical. 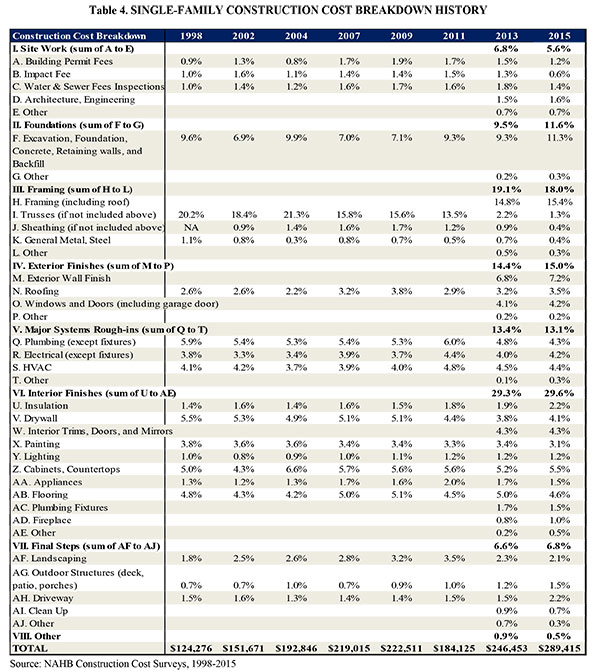